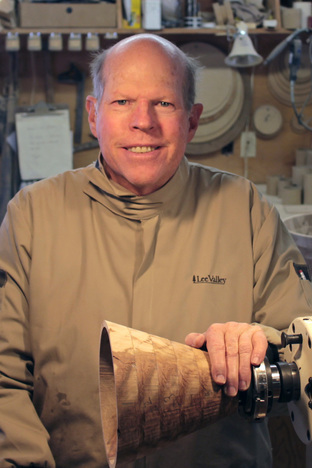 Recent recognition and participation
In the past several years I have withdrawn from a number of  groups that I have been involved with to concentrate on working in my studio.  The increasing popularity of my pieces now means that I have a full time job and little time for outside activities.This has been primarily due to the enthusiasm with which Hopson Grace has been selling my work.

In the winter issue of 'In The Hills' magazine (2015) I was recognized as a local hero for my contributions to the arts and crafts community in the area in which I live.  The article can be viewed here.

​I created two platters from donated wood that tell the stories of two brave young women who have fought battles with mental illness and won.  These two platters were auctioned off in April 2015 to raise money for Dufferin Child and Family Services.  I designed and produced a website that follows the story of these two platters: www.thejourney.jimlorrimanwoodturner.com

I was invited to do a solo show at the Canadian Guild of Craft in Montreal.  It was called "When a Tree Speaks" and ran from November 6 to December 6, 2014.  I created a website for this show which can be seen here: www.whenatreespeaks.jimlorrimanwoodturner.com

I created a show called "History in the Making" where all of the pieces were made from wood that had either a story to it or historical significance. The show was supported by a website (www.historyinthemaking.jimlorrimanwoodturner.com) and on site videos.  The show ran from September 12 to October 31, 2014.  In 2015 this show will be divided between the "If the Walls Could Speak" at the Dufferin County Museum & Archives and The Wellington County Museum.


Past recognition and participation

Not so vital statistics

I am a self-taught woodworker and turner. I have been operating as a full-time bowl turner for the last 23 years at my studio in the Mulmur Hills.

While I sell a number of pieces and take commissions through my studio, most of my sales are through Hopson Grace in Toronto, at the corner of Yonge and Macpherson (information here).  I do one show a year in Pointe au Baril at the Ojibway Art Show (more information here).

On to Wood Turnings, Biography, Galleries or Home